Yellow is the Color of Foreclosure 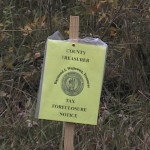 It’s that time of year again. Out and about with the Big Dudes, I spot yellow plastic bags stapled to door frames and porch rails, stuck on stakes in empty lots. Detroit is collecting its trash in the form of burned out houses and overgrown lots, more auction material no one will ever buy. 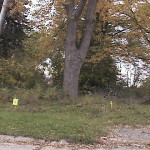 I gave up counting at around 30. Most were on overgrown lots. On one block alone, there were 8. The rest hang from burned-out, weather beaten structures no one will ever want, once perfectly good houses destroyed by a city in decline, dick-head arsonists and the Evil Scrappers. It’s going to reach a point where the sole owner of Detroit will be Detroit. I wonder if the city has to pay the taxes on the property it owns? And if so, who would foreclose on it if it didn’t pay its taxes?

Pointless musing, really. It is what it is and it’s been a long time in the making, years of ineptitude and corruption, city ‘leaders’ bickering over nothing while opportunity got sore knuckles from banging on a door that never opened.

I’m off to do my civic duty, new mayor and all that crap. Not that I think voting will actually change anything. It’s more that I believe if you don’t vote, you have no right to bitch. And I love to bitch.

« Diary of an Abandoned House
Slipping into Winter »