Tangled Up In Red

I was born and raised in Detroit and though I have left it many times, it was always due to an inherent wanderlust and a deep loathing for winter, never about the city itself. This last return to Detroit which, at my advanced age, may well be my last last return, came about as a result of many things, misadventure among them, over a six or seven year time span. I have no desire to go into detail. Let’s just say those seven years were a downhill bitch and in the end there was nowhere left to go but home.

Lady Luck, who had been pretty much ignoring me for awhile, smiled at the irony of me returning to Detroit after vowing never to do so – a vow, I might add, that had nothing to do with the city itself but rather, as noted, with Michigan winters – and, through several dear friends, not only helped me to get here but helped me to buy a house. A house that, like me, was abandoned, beat up and disparing of ever coming back from the brink. But, it was a roof over my head for me and the critters and in that it was the most beautiful thing I had seen in a very long time. 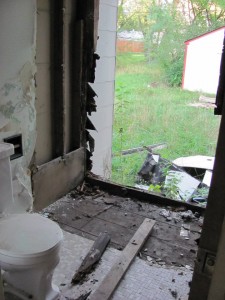 I paid $500.00 for this place. One could argue that it wasn’t worth that at the time. The electrical wiring was gone, as were the water and sewer pipes along with the sinks that fed them. The back door was smashed in. The bathroom wall had been ripped out so the Evil Scrappers could get at the cast iron bathtub. Most of the windows were smashed and those that weren’t were boarded up. The north side rear bedroom wall was so rotted out you could put your hand through it with no effort. The gutters were gone and all the trim boards were rotted out as were the wooden window frames. Raccoons and feral cats were in residence, giving the place a fragrance much like what I imagine the Augean Stables might have had before Hurcules cleaned them out.

At the time of the sale, I agreed to take on the back taxes. I did so partly out of desperation. Homelessness will do that to you, make you desparate. And I did it partly because I figured I could deal with that. I mean, it was obvious the city had assessed this place way higher than its actual worth, right? Surely I could get them to see that this place wasn’t worth anywhere near the ten grand they had it assessed at. An assessment of a grand would have been laughable. Indeed, the city itself had conducted an inspection of the place the month before I bought it and determined its worth at $691.00. I understand the need for property taxes and have no problem paying them. I just happen to think they should be based on the actual value of the property and no one, absolutely no one, could honestly believe this place was worth ten grand. Right?

Mike Duggan is the current mayor of Detroit. I like Mr. Duggan. I voted for him and thus far he has done everything he said he would do. The street lights are coming on. Burned-out abandoned houses are disappearing at an amazing rate. The once overgrown lots are being mowed. There are cops patrolling the streets and should you need to call one, they actually show up. In a recent article, he said the two most important things for the rebirth of Detroit are improving the schools and bringing down the crime. To this I would add an all important third item: cutting through the bureaucratic red tape that is strangling this city. 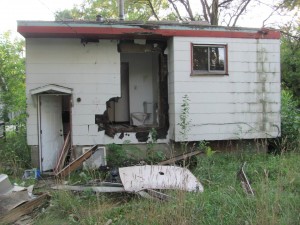 Consider this: it took three years for the results of that August 2011 inspection to find their way through the miles and miles of tangled red tape to the desk of whomever it is that notes what a house is worth and determines what the taxes should be based on that worth. Three years during which the taxes on this house were based on an assessed value of $10,000.00!!!

Consider this: Once the results of that August 2011 inspection did make its way to whomever does the assessments, my tax bill dropped dramatically. An interesting side note here. It took less than two months for the city to up the assessment from $691.00 to a bit over $6,000.00. $6,000.00? If I put a gun to someones head I couldn’t get $6,000.00 for this place. I’d be lucky to get $2,000.00 and that only after pistol-whipping the poor buyer or threatening to kill their dog. 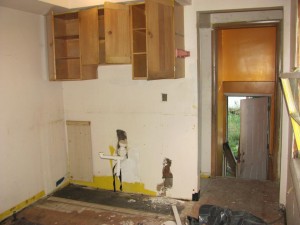 Consider this: no actual evidence can possibly exist in 2011, 2012 or 2013 for a determination that taxes should be assessed against a value of $10,000.00. Either that or whomever is doing those assessments is insane or blind or both.

Consider this: It took over eighteen months for the ownership name change to take effect. During that time I was unable to even discuss this house with city officials as it was not yet registered in my name.

Consider this: I have discovered that a homeowner can contest the assessment of a property. In the 4 years I’ve been here, I have never been given the opportunity to challenge the assessment. This is something I could have easily done, and succeeded at, with but a handful of pictures, had I been given the chance.

My nearly 3 year battle is pretty much over before it ever began. I received one of those bright yellow foreclosure notices the other day. There is a show cause hearing in February but I’m not sure what good showing any cause will do as, from my understanding, once an assessment is made and not challenged, it’s chisled in stone forever more. Pity I was never given the opportunity to challenge those numbers before the chisler broke out his tools. But that’s the way of red tape.

Mayor Duggan also said that it is imperative that the flow of residents leaving the city is halted if the city is ever to get back on its feet. Good luck with that. With the bureaucratic quagmire that engulfs this city, allowing an injustice like this to happen – and it’s happening to a lot of people here in the D – it’s going to be difficult to convince folks they should stick around. However much I may love this city and want to see it recover, if I had the financial ability to leave right now, I’d be out of here. I’d give this house I’ve worked so hard to fix back to the scrappers, let them strip it down to its core, return it to the eyesore it was when I bought it. Then, after they are through with it, the city can fork over $20,000.00 to stuff what remains into a dumpster.

Will I lose this place I’ve worked so hard to rebuild? At this point I’m not sure. I’m looking into various, possible, remedies, all pretty much a quagmire of red tape themselves. There is a bill that would reduce the penalties and interest and cut the balance to a percentage of the properties worth but I don’t know if it’s been signed or whether folks like me will be grandfathered in. And I’m not sure I could afford it even if I am grandfathered in.