The Saga of the Deserted Duo

Jan 4, 2022
So, some jerkweed major asswipe son of a bitch pulled to the curb in the park last night, unloaded a large dog cage – complete with dogs – opened the cage and drove away. I tried to get them but I had Bummer and Girly in the car. By the time I got back to the park it was dark and they were nowhere to be seen. I checked this morning and there they were, down by the river, near where they’d been dumped. I went down the hill with a flat of cardboard and two cans of cat food for them. I’ll go back again in an hour or so with more food. They’re friendly but scared and I figure if I’m seen as the human who brings food, they’ll come to me and I can get them to a shelter.

Jan 5, 2022
Hunger vs fear.
So, the Deserted Duo moved upriver which is why I haven’t been seeing them in the spot where they were dumped. This morning I decided to follow their tracks and, sure enough, spooked them out of their new hidey hole. They ran off so I left.

Went back just now, to within 50 feet or so of where I had last seen them. Called out and, this time, instead of running off, they came toward me, barking their respective heads off. I laid the flat of cardboard on the ground and emptied 2 cans of cat food on it along with every dog cookie I had in my pocket. I hadn’t walked a way more than 10 feet when they ran over and scarfed up every bit. I’ll go back in an hour or so and bring a whole lot more food. It’s gonna get cold tonight, these babies need more food to keep em warm against the night. 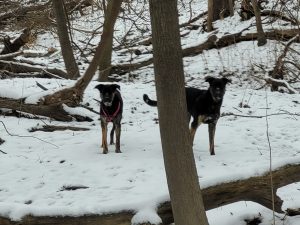 Later the same day.
Just got back. They came running as soon as they heard me. Closer this time. Another day, maybe two, with luck, I’ll have em safe. 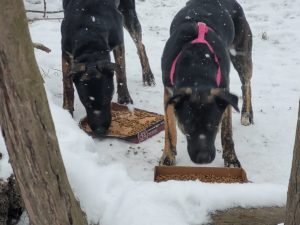 Jan 6, 2022
The saga of the Deserted Duo continues.
I’ll admit to a bit of worry over night about Harness and None (yes, I’ve named them). It was a damn cold night. The windchill factor when I left for the park this morning was -1 F. To my relief I spotted them on the ridge by the river when I was barely half way to their hidey hole. When they spotted me, they came running. Not close, mind you, but they came to me and more or less escorted me to the ‘feeding spot’. Dogs are a lot like conservatives in that they hate change, embrace routine, hence the importance of feeding them in the same spot.

I found the cardboard flat I’d left the day before and pulled another from my bag. I dumped a can of cat food on each flat and divided the dry food I had between them. I got 3, 4 feet away and they attacked that food. None is the more skittish of the two so Harness managed to chow down both cans of cat food before None even got there. I talked to them both for a moment, told them what was coming, that they had to let me lead them out of exile to somewhere warm and safe. And then I left, telling them I would be back soon with more food.

They followed me almost all the way back to the road. A good sign, this. When I go back in an hour or so, I’ll try to get them to take a cookie from my hand. Harness might. None? That one may take a bit of work.

Later the same day.
Well, we’re getting closer. I sat on a log, set the cardboard flat down next to me and dumped food in it and, after a moment of hesitation, they started eating. And my prediction was right. Harness took a cookie from my hand, None would have nothing to do with that nonsense though (s)he happily scarfed up the ones I tossed.

Jan 7, 2022
So, guess who got sloppy dog kisses in exchange for some serious ear rubbing? Just from Harness, sorry to say. None is very skittish. She’s gonna be a hard one to catch. I tried to leash Harness but the movement scared her. Still, they both followed me all the way to the street so, maybe tomorrow I can get them into the car. If I can leash Harness without her freaking completely out, I think None will follow.

It’s a balmy 16 F here at Eliza Howell park. Our intrepid reporter’s hike into the woods was uneventful, though a branch snagged his hat at one point. He is happy to report that the Duo are alive and well, barking loudly and running to greet him. Harness came with sloppy kisses while None stood back nervously. They followed him to the feeding spot and chowed down on Purina One, grain free turkey and venison. Our Reporter left quickly so they wouldn’t follow him but will return in the noon hour. There is speculation here of a possible rescue attempt this very day so stay tuned.

Later in the day.
Close. Really close. Sadly, no cigar. Some guy in desperate need of a muffler went roaring by and off the Duo went back into the woods. I parked the dogcar right at the edge of the woods and had both of them there (the hotdogs worked like a charm). Harness was even eating the food I had set in the car while None paced nervously nearby. I could have snatched Harness and gotten her in the car but that would have left None alone and I won’t do that to her. I don’t think she would survive.

There was progress made, however. None finally took a cookie from my hand. And more than a few pieces of hotdog and she almost let me pet her. This is a good sign.
Sadly, I was able to determine what the marks on their snouts is. I kinda knew already but getting close confirmed it. They both have muzzle scars on their snouts. I’ve seen this before in dogs who were muzzled all the time. These babies were not treated well.

Ever wake up with that vague sense of apprehension, that something wasn’t right, so called free floating anxiety? That’s how I woke up this morning. Couldn’t shake it.

Got to the park and headed into the woods. It was gray and silent back there. I walked and walked, worry growing. They usually hear me coming and start barking. No barking this morning. Indeed, no sign of them anywhere. I can’t describe what that did to my heart but you probably know that feeling.

I trudged back to the car, passed it and looked out over the empty spaces of the park, hoping maybe I would see them. Nothing. The park was empty. When I turned back to the car my mood went from despair to utter relief for who was standing next to the car? Harness and None. I fed them, tried to lure them in, no luck. They took off, back into the woods and I went home. Dogs to walk and all that.

Had an Oh Oh moment upon my return with Jessie and Girly when who should come out of the woods but the girls. Girly was nonplussed but Jessie went batshit crazy and the girls ran back into the woods.

I came back again, loaded with food and headed back into the woods. This time when I called they started barking but the sound was coming from another place. I got down to the river, looking everywhere for them and spotted them … on the other side of the river. How they got there I have no idea but now they were on really dangerous ground as that side of the river is residential. Luckily, there’s a playground right above where they were.

I hurried back to the car and drove over there. I called, they answered. I’ll spare you the several hours of us playing silly games to no avail. Harness was easy enough to catch and leash. I tried tying her up in the car in the hope that None would jump in with her. They are tightly bonded, those two. She would come right to the edge but not go in. I finally felt so bad listening to Harness cry that I decided to go for a walk with her.

And that’s when it all fell into place. Everywhere I walked, None followed. I considered. On this side of the river I wasn’t that far from home, 7, 8 blocks maybe. I had often walked my own dogs out this way. What the hell, nothing else was working so I stuffed my pocket with hotdogs, closed up the car and started walking.

And together we walked all the way home, Harness by my side, None following close behind. Sisterhood saves the day.
They are now safe and sound in the dog car with a ton of food and a large pile of blankets. 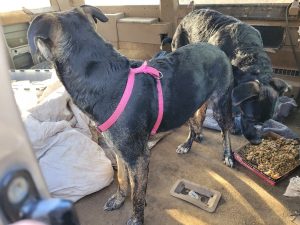 What to do next, that’s the question.

4 Comments to The Saga of the Deserted Duo