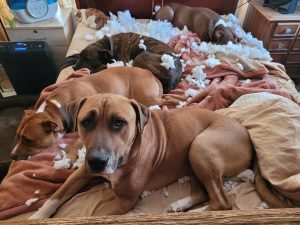 The more I think about Cooper’s recent bad behavior the more I think a bit of jealousy and a smidgen of feeling abandoned is at the heart of it. As is the case with puppies, he chewed his share of slippers and empty boxes, PJs and socks, destroyed a pillow or two and loved nothing more than to pull things from the garbage and spread them around the house. He outgrew that by and by and started leaving my stuff alone. He became best buds with Bummer, loves to antagonize Jessie and bugs the hell out of Biscuit when all Biscuit wants is some alone time. He hates being separated from me. At the moment he is in the back hallway, moaning his lungs out. It’s a mournful sound. You’d think he was dying back there. He’s such a very strange baby, this 100 pound dog. 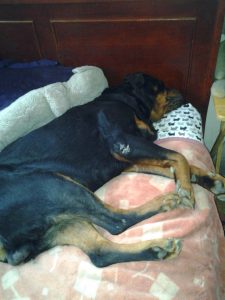 I connect with critters in general and dogs in particular at a level I don’t fully understand. Lugs, my Rotty, was a good example. It was the last few days of January 2012 and he was just trucking down the middle of the street one day, a big dog, a hundred and twenty five pounds of black and tan, scaring the hell out of anyone who happened to be out on the street at the time. I was standing in the front yard, watching him. He stopped, looked over at me and trotted over to the gate with this look on his face like, ‘hi, I’m home, what’s for lunch’. I opened the gate, he strolled in and stayed with me for the next 5 years. 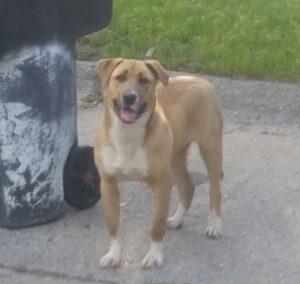 Encountering Cooper was much the same. He was just standing at the end of the street next to a garbage can one morning as I was driving to the park. I looked at him, he looked at me and something just clicked, like he was saying, ‘hey there, I’ve been waiting for you’. I told him I’d be back in a bit and drove off. When I got back he was still in the same spot. I dropped of my dogs at the house and went back for him. I got out of the van, opened the side door and he jumped right in. In many ways he became the golden child. Once we got past the ‘getting to know you all’ socializing period and he joined the pack he became my shadow. He would sleep at the head of the bed, taking up all the damn space up there and rest his massive head on my chest. He would follow me to the bathroom, everywhere really, and try to help me get dressed in the morning, which, I might add, he did a lousy job of, more often than not tipping me over like a turtle on its back as I tried to put my pants on.

And then Girly came to live with us after her Human died. That, I think, is when things began to change. Girly and her human George were tight. Everywhere George went, Girly went. Because I’m the one who rescued her when I found her human dead, she bonded to me. She follows me everywhere I go, even more of a shadow than Cooper. Because she would whine and cry and bark when I left the house, I started taking her everywhere I went. And that is when Cooper reverted to puppyhood. I would find my socks, soaking wet, in the bed. Or my slippers. He wasn’t chewing them up, just taking them to bed with him. He upped his shadow game to match Girly so now I had two dogs to trip over or accompany me when I peed.
They get along quite well, jumping on each other and playing. Girly can be quite aggressive at times which kind of scares him a little but over all they’ve become quite the friends. He’s not as close with her as he is with Bummer. Those two are hell on wheels, tearing up the backyard, flushing deer in the park and disappearing for worrisome lengths of time. But if I go somewhere with Girly and leave him home with the rest of the dogs, he moans and cries and now, tears shit up.

So, I’ve decided to change things up. Since I kind of have to take Girly everywhere I go, I will now take Cooper everywhere as well. We’ll see if that changes his behavior. I sure hope so. I can’t keep buying new pillows.

Posted in Critters | No Comments »