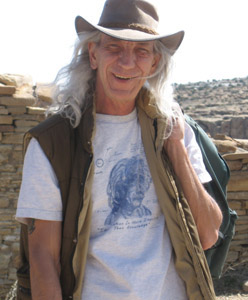 EJ Knapp was born during a thunderstorm in Detroit, Michigan several years before the Motor City discovered fins. Raised in a working-class, blue-collar neighborhood, he morphed into the stereotypical hoodlum a teenager growing up on the west side of Detroit was expected to be. He took to ten-inch switch blades, bike-chain belts, the proper assembly of zip-guns in shop class, rumbles, beer drinking, heavy petting in the park and juvenile delinquency in such a lack-luster way that he was finally forced to drop out of high school, jump in his 1960 Chevrolet and hit the road. He’s pretty much been traveling down that road ever since.

Throughout his life he has been a paper boy, a bagger in a grocery store, a roofer, a forestry ranger trainee, a Navy squid, an auto mechanic, a factory worker, a rock-runner, a professional college student, a peer counselor in a street clinic, a drug dealer, an ice cream truck driver, an audio/visual technician, a professional photographer, the IT manager for a San Francisco law firm and the author of two published novels.

He has published numerous short stories in obscure on-line magazines that no longer exist. He claims this is not his fault. He is the author of the novel Stealing The Marbles, released by Rebel ePublishers in 2010, and Meter Maids Eat Their Young – A Love Story, released by the same publisher in 2012. He is the author of a book of short stories titled Thief and Other Love Stories as well as the non-fiction book Secrets of the Golden Gate Bridge.

Currently he is back on his stomping grounds of old, back in the Motor City where he has bought an abandoned house – a mere eight blocks from where he grew up – for a ridiculously small amount of cash. Between his many critters and the constant repair of the house, he barely has time to write. Despite this, he’s working on a new novel and recently finished an update to Secrets of the Golden Gate Bridge.

3 Comments to About EJ