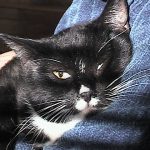 Here comes the flood
We will say good-bye to flesh and blood.
~Peter Gabriel

Is death any easier to bear if the death is not that of a human? Is it easier to bear if the death was necessary? A kindness? An act of mercy? Does the decision to end the life come unimpeded? Is that last touch, that last kiss, that last whispered good-bye as the needle slips into the vein and she arcs her head in your direction with one last sigh, eyes wide and searching, any less a ripping out of the very essence of you because it’s only a cat?

The Doubtful Guest is gone and my heart hurts. I am sad and I am angry. I wish oblivion upon every manifestation of a supreme being ever conjured by any human in the entire history of humans on this or any planet. May they all rot and be forgotten and fall away as dust in some distant corner.

She was damaged goods, unwanted, sitting in a cage for weeks when I came upon her over two years ago. Neurological problems, my vet said. She’s kind of weird. Walks in right-hand circles. Has six toes on each of her front paws. Chases things that aren’t there. Scratches at the walls. No one wants here and we can’t keep her here much longer. I fell in love with her the moment they took her from the cage and set her in my arms. I understand unwanted.

She spent her first month with me, sitting in the kitchen, her nose nearly pressed to the wall. That’s how she got her name. She reminded me of a character in an Edward Gorey book I had. I would sit with her on the floor, scratch her lightly behind the ears. I learned early on that she didn’t like to be stroked. Something to do with the neurological damage she had suffered as a kitten. She was overly sensitive on her back and hind quarters.

She did like to have her chin scratched. And her nose kissed lightly. And, though it was awkward for her, she liked to roll over on her back and drift away on tummy rubs, sighing deeply and slipping into an erratic, halting purr that could only be heard with your ear pressed nearly to her chest.

She attacked the paper grocery bags I set out for garbage. Drove them across the room, trapped them in the corner, crushed them until they were flat. She chased things only she could see. The walls all have scratches on them. In the mornings when I cleaned the litter boxes, she would follow me from one to the other. When I was done, she would crawl inside, rearrange the litter, mark it again.

At night she would sit on my bed, just behind my curled knees, and stare off into space. Sometimes I would tug lightly on her tail. She would turn to me then and nuzzle my hand.

Early last Monday morning she had a seizure and took a hard fall from the bed. The vet I took her to was useless. Didn’t even take her past history into account. Never noticed the uneven dilation of her eyes. Tests, she said. An MRI. An x-ray. I took her home and tried to care for her myself.

We made some progress that first week. It was like having a baby again. Up every few hours at night. Bottle feeding. Cleaning up the mess. I thought, hoped, we were getting somewhere. She would eat and then curl up in my arms, giving me several more hours of sleep before waking again to start the process over.

And then the progress stopped. She started to yowl. And then the growling low in her throat began. I feared she might be in pain. I took her to another vet. This one was up front, more concerned with Doubtful then the money she might receive for doing a battery of useless tests. She gave it to me straight up. The prognosis was poor.

I buried The Doubtful Guest yesterday morning in a deep, glazed planter the color of the sky at dusk. I gave her a feather and a small ball and then wrapped her in my shirt and put her beneath the ground. Over her I will grow roses, lavender and irises.

As I walk about the house, trying to resume my life, trying to get back into my writing, I keep checking to see where she is. It was always like that with her. She wasn’t tuned into this world enough to watch out for herself. That was my job. Now she isn’t in this world at all, but I can’t seem to keep that thought in place.

And I just want to follow her wherever she went.